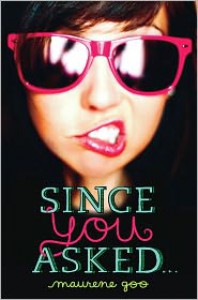 MY THOUGHTS:
One word to describe it: HILARIOUS. One phrase to describe it: STORY OF MY LIFE.
Since You Asked by Maurene Goo is a short and funny story that many (especially Asians or people with immigrant parents) can TOTALLY relate too. It's not even funny how many parallels Holly's family and with mine. I absolutely loved Maurene's style of writing and how she easily manages gets into a teenager's head and can manage to create a fabulous and light story! Since You Asked takes you into a pretty realistic life and one that takes you into a story about family, friends, school, and the clash of two different cultures. The plot and story itself was simple but there were some scenes that I felt weren't needed and ones that could have been added to help with character and story development.

Holly is a hilarious character that I adore! Outspoken and rebellious (well to an extent), Holly is one to always speak her mind and usually gets in trouble for it. Then she gets her own column which may I add would love to see in our school newspaper and she lets out her pent up feelings and her columns were on of my favorite things to read! Holly is basically the girl in my head. Literally. The one who says what she thinks to anyone and who does what she wants to do. I have all that...in my head. I talk back...in my head. I say what I think...in my head. Never do I actually say it out loud and Holly is one of the heroines I can relate to the most from any YA book. I'm not sure if this was purposely done or not but I did hope to see more of a development in Holly's character and she did kind of have this slight change at the end of book so hopefully book 2 continues on with that but keeps Holly's personality just the same. Her friends are awesomesauce!! They're super supportive, a bit judgy but they know what the limit is. Also Holly and David? SHIP

The clash of cultures was one of the main aspects that was focused on and I loved the way Maurene tried to show the way it affected teenagers and what families expected. Maurene did show how annoying parents were and disadvantages of the not being fully American were. But she did manage to show all the love and the closeness Holly was to her family. Family is a something will always have its pros and cons but something always needed. Maybe sometimes not wanted, but definitely something a person needs.

Since You Asked is a light, humorous story that will put a smile on anyone's face but creatively deals with problems any teen would face in high school. It's not a book to miss especially for all you looking for a short, quick read and realistic fiction readers!!
Tweet
898 BOOKS