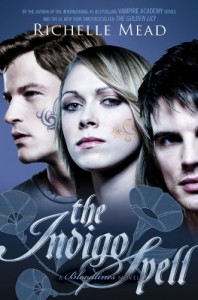 Holy alien babies everywhere! I REFUSE to be okay with that ending. Right when everything's okay again, things get even worse. *exasperated sigh* WHY, Richelle Mead??
But I totally give props for the adorableness at the scene before the ending.

The Indigo Spell was an awesome although somewhat irritating book. The plot of the series moves forward and we see a drastic change between character relationships and self development. Sydney, for example, is more aware of everything going on with the Alchemists and more rebellious, which I totally cheered her on throughout the book! She finally comes to a stage where she sees the bigger picture and the details/aspects within it inclusing family, friends, potential boyfriend, Moroi, and the Alchemists.

Adrian. Adrian. Adrian. Adrian. SYDRIAN. SYDRIAN.
*grins stupidly* *sighs dreamliy* Adrian=the best thing about this book. Loyal, protective, courageous, hilarious, determined, and romantic, whats NOT to love about him? Sydney and Adrian seriously had me snorting and grinning through their actions and thoughts. Even after Sydney rejects him, he does go through this depressed phase but he recovers quickly and was totally cheery and was determined that he would get Sydney to fall in love with him if she already hadn't! It was just hilarious seeing them together. And the thing abouot Adrian is that he's always there fr Sydney no matter what...

The theres Marcus Finch...the mystery piece of the puzzle. There actually wasn't much to him except that he was a rebel alchemist. I expected more not in appearance but actions and his role in the book. He was also quite annoying unfortunately. I had hoped to like him but I don't think I can. And I kinda hope he isn't part of the next book. The only thing I applaud him was pushing/driving Sydney to the direction that showed more of the Alchemist and how they really work.

Overall however, Richelle Mead continues to enrapture me in the series yet again!! I do recommend this to Vampire Academy fans and totally encourage any paranormal book lover out there to give the series a try!
Tweet
898 BOOKS