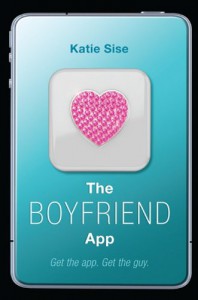 MY THOUGHTS:
Original, creative, and funny, The Boyfriend App by Katie Sise is a contemporary novel I really enjoyed! It's a really light novel about friendship, dating, family, and social class in society/in a teen perspective. Katie Sise did a pretty awesome job writing this novel, especially with the idea of an app competition and how she easily relates to teens with their/our use of technology especially the newest soft wares and how much we depend/use them. Katie managed to write a kind of book that was actually way more complicated then it seemed and it was awesome how it was plotted out.

The one flaw of this book was her app itself. I felt that if Audrey was really that smart then she should have figured out the errors/flaws in the app that she could have fixed. And with the other app she created I feel that she didn't really think it all through like all the chaos and problems she would create by using it. As smart as it was, it was also not the best of ideas.

I really do like Audrey and her gang of friends though. They seemed real and were easily connectable! They supported her and were true friends. One of my favorite characters had to Lindsay, Audrey's cousin! Blogger (fashion, but still!!) and basically queen of the high school, Lindsay is awesome! Unlike other popular cliche relatives, she was cool and was super supportive and helpful when Audrey created the Boyfriend App. She stayed positive and believed in Audrey; a great motivator. I do think it would've been awesome to see more of Mindy a close friend of Audrey's more and see more of her relationship with Audrey.

Then there's Aidan...her best friend and crush. Aidan is super cute and puppy-like in a dark, mysterious, and brooding way!! I have no idea if that even makes sense but it's so true!!!! His feelings for Audrey were a bit obvious except to Audrey :P But he should have done something more to make her see that..even though it is partially Audrey's fault for being that dense. But I do seriously heart their relationship and how he just knows how to make Audrey feel better and it's just adorable. Oh and I also want to briefly touch up on Xander who I actually liked. I think it would've helped to get a feel for him more if he was in the book/had more moments with Audrey even if they were just friendly ones.

This one's for all you contemporary lovers and techy people who are into a book like The Boyfriend App, which may I add does NOT fully focus on the romance aspect. Honestly it was more of a sub-plot that wasn't as addressed than I thought it would be but I liked it enough and thought it had the perfect dose of reality, kissing, and actual plot to make any YA reader enjoy it.
Tweet
898 BOOKS